Home » Porridge Recipes From Around The World

Porridge Recipes From Around The World

Wonderfully warming, comforting and nutritious porridge pots are a satisfying staple all over the world. The ultimate comfort food is super versatile and can be served up hot or cold for breakfast, lunch, or as an alternative dinnertime snack.

Yummy creamy porridge can be savoury or sweet, thick and gooey, or runny if you prefer. Sprinkling on your favourite healthy toppings instantly boosts the nutritional value of this simple grain dish and transforms it into a bowl of wholesome goodness.

If you can’t get enough of this delicious dish, why not try some classic porridge recipes from around the world to satisfy your craving…

In Mexico, porridge lovers prefer a traditional recipe that dates back to the ancient Aztecs. Their favourite comfort food is typically made with corn masa harina (corn flour) mixed with water and ground cacao beans to a thick, drinking consistency.

The fortifying hot drink can also be made with milk and infused with vanilla, and star anise and cinnamon spices. You can make your own version of champurrado by adding more oat milk than usual to your porridge, along with your favourite spices.

Often served as a breakfast dish, congee is a savoury rice porridge that is eaten throughout Asia. Leftover rice is often used to create a thin, runny porridge that is topped with pickled vegetables, tofu and eggs. This nutritious protein-packed dish is a popular lunch option and is also consumed as a hangover cure.

Thick and nutrient-rich genfo is a tasty mixed legume and grain porridge that is usually enjoyed for breakfast in Ethiopia. The African porridge pots combine millet, maize, chickpeas, yellow peas, Ethiopian oats, wheat, barley, soybeans, cardamom and sorghum to make a dry-roasted flour that is added to boiling water.

The most popular genfo toppings are a spoonful of kibe (spiced butter) or a dollop of yogurt. To make genfo at home, combine the cooked legume flour and spices and add to your porridge, stirring well to blend all the ingredients and flavours.

In Russia, Poland and other Central Eastern European nations, porridge-like Kasha is usually eaten as a side dish. It’s traditionally made with whole-grain buckwheat that is boiled in water or milk.

Thick and creamy oat-based porridge is the No.1 breakfast option throughout Central Europe and North America. The heart-healthy dish can be made with processed quick oats or whole grain oats that deliver a high fibre and vitamin count.

To make an authentic oatmeal-style breakfast, sweeten your porridge with raisins, brown sugar or lashings of maple syrup.

In Southern India, porridge is often made from Upma – coarse rice flour. Dry-roasted semolina is a suitable standby. The thick porridge is traditionally flavoured with spices, chillies and vegetables, and garnished with crushed nuts and a sprinkling of aromatic Masala spice.

If you want to enjoy your porridge pots Slovenian and Croatian style, just add honey, yogurt and a handful of your favourite crunchy toppings for a sweet Žganci. The classic recipe is made with maize, wheat or buckwheat flour and water, and is often served as a savoury porridge side dish for a hearty meaty main meal. 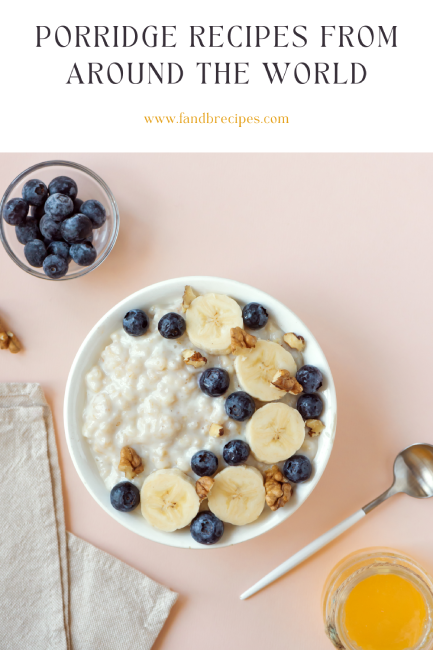 Katie writes for F and B Recipes. She lives in New York with her dog Coco. When not writing, she can be found baking (and eating) chocolate chip cookies.